After Grid Warning, a Call for Moratoriums on Electric Heat Pumps

Today, NEFI and its state association partners delivered a letter to the governors of the six New England states, demanding a moratorium on utility-funded conversions to electric and natural gas heating systems. 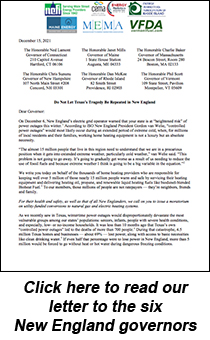 The letter cited recent warnings by electric grid operator ISO New England that the region is at "heightened risk" of power outages this winter as a result of constrained natural gas supplies and increasing use of electric heat pumps. Pointing to the catastrophe that occurred in Texas earlier this year, fuel dealers argued that wintertime power outages would disproportionately harm their states' most vulnerable groups such as low- or no-income households, and that heating system conversions only make the problem worse.

In calling for a moratorium on electric and natural gas conversions, fuel dealers raised the following issues with their governors:

In addition to sending a letter to each of the governors, NEFI and its state association partners hosted an online press conference, which was attended by reporters from a number of regional newspapers and TV stations. See below: a video recording of that event and some of the coverage that resulted from it.