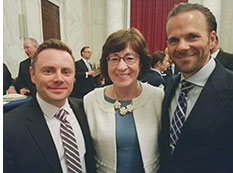 Representatives of NEFI participated in last week's New England Council (NEC) Annual Conference in Washington, DC. The NEC is a non-partisan alliance of "businesses, academic and health institutions, and public and private organizations throughout New England formed to promote economic growth and a high quality of life in the New England region." The organization is both non-profit and non-partisan, and provides regular opportunities for its members to engage members of Congress and key federal regulators. NEFI is a longtime active member of NEC and serves on its Energy & Environment Committee.