Imagine the fuel that heats your home was so clean it actually helped remove carbon and other greenhouse gases from the atmosphere. Residents of Lincoln, Maine won’t have to imagine for long — soon such a fuel will be produced in their community. 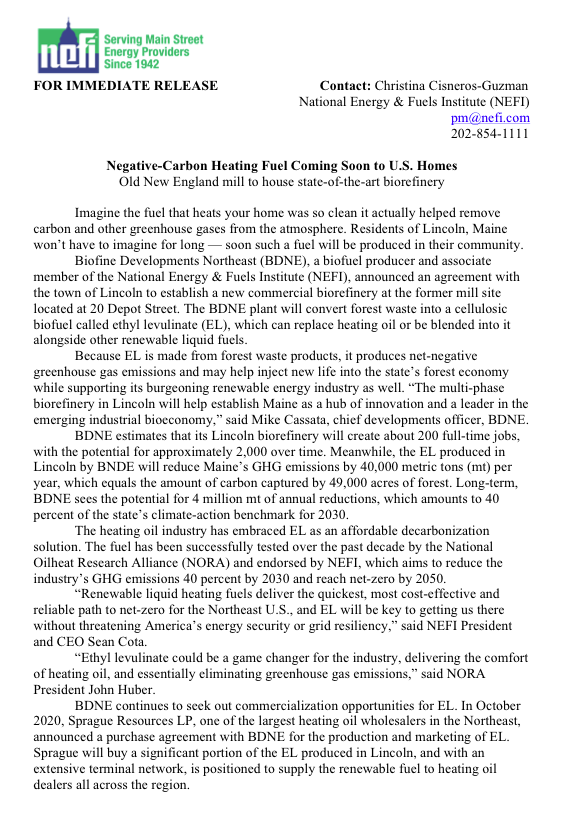 Please share this story with your customers and local news agency contacts.

Biofine Developments Northeast (BDNE), a biofuel producer and associate member of NEFI, announced an agreement with the town of Lincoln, Maine to establish a new commercial biorefinery at the former mill site located at 20 Depot Street. The BDNE plant will convert forest waste into a cellulosic biofuel called ethyl levulinate (EL), which can replace heating oil or be blended into it alongside other renewable liquid fuels.

Because EL is made from forest waste products, it produces net-negative greenhouse gas emissions and may help inject new life into the state’s forest economy while supporting its burgeoning renewable energy industry as well. “The multi-phase biorefinery in Lincoln will help establish Maine as a hub of innovation and a leader in the emerging industrial bioeconomy,” said Mike Cassata, chief developments officer, BDNE.

BDNE estimates that its Lincoln biorefinery will create about 200 full-time jobs, with the potential for approximately 2,000 over time. Meanwhile, the EL produced in Lincoln by BNDE will reduce Maine’s GHG emissions by 40,000 metric tons (mt) per year, which equals the amount of carbon captured by 49,000 acres of forest. Long-term, BDNE sees the potential for 4 million mt of annual reductions, which amounts to 40 percent of the state’s climate-action benchmark for 2030.

The heating oil industry has embraced EL as an affordable decarbonization solution. The fuel has been successfully tested over the past decade by the National Oilheat Research Alliance (NORA) and endorsed by NEFI, which aims to reduce the industry’s GHG emissions 40 percent by 2030 and reach net-zero by 2050.

“Renewable liquid heating fuels deliver the quickest, most cost-effective and reliable path to net-zero for the Northeast U.S., and EL will be key to getting us there without threatening America’s energy security or grid resiliency,” said NEFI President and CEO Sean Cota.

BDNE continues to seek out commercialization opportunities for EL. In October 2020, Sprague Resources LP, one of the largest heating oil wholesalers in the Northeast, announced a purchase agreement with BDNE for the production and marketing of EL. Sprague will buy a significant portion of the EL produced in Lincoln, and with an extensive terminal network, is positioned to supply the renewable fuel to heating oil dealers all across the region.